You are here: Home / content / The Cowichan Lake Weir 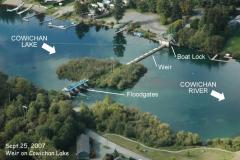 The weir on Cowichan Lake is used to control the outflow from the lake into the Cowichan River. For much of the time between late fall and late spring each year, it does nothing, and the weir is referred to as “off control” – since the lake level is above the top of the weir. For most of the rest of the year the weir is normally functional.

Its job is to balance two objectives:

1. to maintain a flow rate, or discharge rate, in the river above 7 cubic metres per second (m3/s), and

2. to maintain sufficient water in the lake as long as possible. 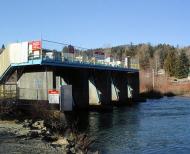 In the later summer – early fall period, the two goals cannot both be be met in most years. Management of the weir becomes a challenging judgement call in which the lake level, discharge rate in the river, salmon priorities, and rainfall predictions are all factors which must be juggled.

In low water years, the lake level may actually drop below the level at which the weir comes into play. This situation, which was common before the weir was built in 1957, is avoided if possible, in order to ensure that some water is left to provide “pulse” charges into the river which will trigger migrating salmon, who are swarming in Cowichan Bay, to start moving up the river.

The shifting decision-making is guided by a “rule curve” which was established some years ago to help with this process. The inflexibility of the rule curve has led to a proposal to modify the curve to a “rule band”. The provincial government has yet to consent to implementation of the rule band.

Physically, the weir is roughly 1 metre tall. It was built in 1957 and is managed by Catalyst Paper, owners of the Crofton Mill.

Late summer-early fall conditions in recent years – low water, and low precipitation even into November – resulted in the Cowichan Management Plan recommendation that changes to the weir, including raising it almost a metre, should be seriously considered.  A consequence is “potential effects on lakeshore properties due to significantly increased water levels during weir operation.”

In 2014, the CVRD passed a resolution in support of the Plan’s “recommendation to store and/or access sufficient  spring  runoff  in Cowichan Lake to sustain river flows during summer and fall.”

Click below for Cowichan River flows, and info about replacing the weir at Lake Cowichan