We want to be able to eat shellfish from Cowichan Bay.

Indicator: Shellfish from designated areas of Cowichan Bay are harvested for human consumption by 2020.

Cleaning up the Cowichan estuary so that bivalve shellfish (clams, mussels, oysters, etc.) can be harvested again is a critical target, especially for Cowichan Tribes. Shellfish have been a main food source of the Cowichan people, but there has been a government-imposed harvest closure since 1973 due to pollution concerns. This target was informed by estuary workshops convened by Cowichan Tribes in 2010 and 2011 and promotes a whole-of-watershed approach, looking not only at direct estuary pollutants but also at upstream issues that flow from the Cowichan and Koksilah Rivers as well as feeder streams.  “Those clams are the canary in the coal mine,” said Chief Harvey Alphonse.[1]

Progress on this target is closely linked to achievements in related targets for clean water and public health due to the inter connectivity between these values (see those target profiles for more information). 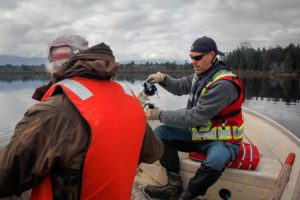 Water quality testing: An early focus for the CWB and its partners was following up on the BC Ministry of Environment’s observations of pollution levels exceeding the objectives set for the Cowichan and Koksilah rivers.[2] [3]  In 2012, Cowichan Valley Regional District (CVRD) and Cowichan Tribes partnered on a $200,000 Cowichan Watershed Partnership Project to assess water quality priorities.  In 2013, CWB undertook further water sampling to assess the impact of farming on water quality which revealed extremely high levels of phosphorus, turbidity and coliform bacteria. DNA tracking turned up two prominent sources of the coliforms: human and bovine.

Environmental Farm Plan: After water quality testing revealed issues arising from farm run-off, CWB members visited with local farmers and invited them to a workshop on the issue after sharing large aerial photos pinpointing the extent of coliform contamination. On June 19, 2013, the BC Ministry of Agriculture (MOA) and the CWB hosted a workshop for dairy farmers entitled "Keeping Your Farm’s Run-off Clean.” Presentations included: the fall 2012 water sampling results; regulations on manure management; how to keep runoff “clean”; and Washington State Environmental Farm plans. This led to a successful Group-based Environmental Farm Plan (GEFP) for dairy producers in the area to identify best management practices and provide funding support to improve nutrient management. Extensive water quality monitoring was repeated in 2017-18 and is continuing in the estuarine and lower river areas, coupled with support for agricultural outreach and education.

Better boating: Curbing the impact of human activity in marinas and mooring areas in Cowichan Bay has been an ongoing effort.  The CWB’s role has largely been to document the problem and encourage action through the Water Quality working group and its partners. To address high coliform levels in the area around the docks, the CVRD brought in regulations on sewer hook-ups for float homes, restricting the amount of untreated sewage entering the bay.  In addition, CVRD, along with Cowichan Tribes, DFO and other federal departments, sought to address boat mooring and derelict boats, which were also adding contaminants to the bay.  By 2017-18 most derelict vessels had been removed.

Municipal Sewage: The Joint Utility Board (JUB) is a secondary sewage treatment partnership between the Municipality of North Cowichan, the City of Duncan, Cowichan Tribes, and the CVRD. Recent low water levels have challenged the JUB to meet dilution requirements for the treated effluent which flows through an outfall pipe into the Cowichan River. The JUB plans to move the sewage effluent to an ocean location. Federal funding for the project was announced in 2016.

Estuary Education: The Cowichan Estuary Nature Centre, built by the Cowichan Land Trust, is educating residents, visitors and school children about estuary ecology and providing a base for much of the restoration. The CWB contributed funds and support for a three-dimensional watershed display table and wall panels. 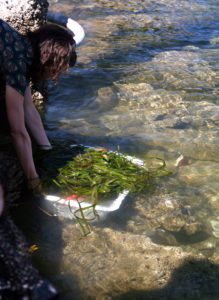 Eelgrass Habitats: Nearshore estuary habitats are also important to the overall health of estuary ecosystems, particularly the benthic zone. Through the Cowichan Land Trust, SeaChange, and the Cowichan Estuary Nature Centre, several formerly productive eelgrass beds have been replanted. However, boat propellers and anchor chains were chewing up the new plantings. In 2010 after a citizens group raised concerns, local partners created legally protected zones, using the Vessel Operation Restriction Regulation (VORR) of the Canada Shipping Act. The CWB’s Estuary and Water Quality working group helped coordinate this plan and has provided funding for the marker buoys and information brochures.

Clam Garden: In 2018, CWB hired a Cowichan Tribes member to start laying the groundwork for a clam garden pilot project to potentially grow clams in the First Nations tradition.

Regularly testing the water quality throughout the watershed is important to gauge changes over time. In 2017, CWB conducted a major water quality attainment sampling initiative with local partners to follow up on earlier sampling and funding is in place to continue sampling into 2018-19. This “citizen science” initiative engaged students and volunteers with several stewardship groups to take over 1000 water samples from close to 40 sites in local rivers (Cowichan, Somenos, Quamichan and Koksilah), the south Cowichan area, and over 20 sites in Cowichan Bay. The data will supplement previous attainment sampling and other studies (2010-2012) that assessed water quality after Stoltz Bluff on the Cowichan River was rebuilt in 2006 to keep sediment from destroying spawning beds.

Mascot Stth’aqwi’ finds friends on the riverbank. May 2021