You are here: Home / Supply and Demand

The Cowichan Watershed can be characterised as having high precipitation/recharge, high storage, and low population/demand in the western and upper half of the watershed, contrasted with low precipitation, low storage, and high population/demand in the eastern and lower half. Supply and demand are not matched regionally, nor seasonally, and the supply-demand gap is pushed to extremes in the late summer and early fall.

The watershed is much more than just its visible surface features. All of the water originates as precipitation – rain and snow – and the lakes and streams are defining elements, but much the water is retained as groundwater.

It is estimated that 95% of the fresh water in the world excluding ice caps and glaciers, is groundwater. Groundwater moves more slowly than surface runoff, but it is in motion. Moving even more slowly is groundwater contained in aquifers, underground areas covered by low-porosity caps. 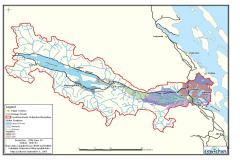 The hydrological interactions between water on the surface – in streams and lakes, groundwater, and aquifers are complex. They are understood in principle, but data collection and mapping of subsurface hydrological features and vectors are difficult. We are fortunate that groundwater features of the lower Cowichan Watershed are better mapped than in many areas. However, more information is required so we can understand the relationships between groundwater and surface water – and the consequences of our actions, past, present and proposed.

Aquifers tend to be relatively stable repositories of high-quality water, consequently, they are the target of domestic, municipal, and agricultural wells. With modest demand, aquifers will recharge. With growing demand and reduced precipitation, many of BC's aquifers are unable to meet demand and have become stressed.

Population growth results in an increasing demand for water, particularly in summer. The number of humans has exploded in the region: from perhaps 2000 in 1871 to 83,000 today; yet nature has not ramped up the water supply at all.

The Crofton pulp and paper mill, owned by Catalyst Paper, is the single largest user of water from the Cowichan River. Water is diverted from a pump station just west of Duncan, to Crofton. Catalyst's water permit allows the company to take up to 2.832 cubic metres per second (m3/s) – 89.3 million m3 per year. When flows in the river are very low, as they were in October 2014, the mill is able to operate with less water. At that time, only 4.5 cms was entering the river at the weir on Cowichan Lake, and the mill reduced its intake to 1.6 m3/s.

Agricultural users of water, distributed more generally throughout the region, take about 65% of their water from surface sources, and 35% from groundwater. In a wet year, such as 1997, an estimated 7.5 million m3 was used

; 2003 was a dry year and 18.5 million m3 was used in agricultural applications. About 2500 ha of land was irrigated in these years. Scenarios that include irrigation buildout to 6900 ha, envision water demand for agriculture circa 2050 of 44 million m3 per year.

Exacerbated by reduced summer precipitation – one of the manifestations of climate change – the Cowichan River, and the  groundwater sources in the lower Cowichan Watershed, are no longer able to deliver as much water as humans demand – residents, farmers, and industry – demand in late summer. Other species and the natural systems are the first to suffer from this situation.  The most visible and most critically impacted victims of this situation are the fish.

Solutions are not easy, quick, or inexpensive. The development of the Cowichan Basin Water Management Plan and the formation of the Cowichan Watershed Board have been essential early parts of the work. The Targets developed by the Cowichan Watershed Board lay out tangible goals that will benchmark our progress. Data, education and conservation are essential in working to solutions: there is no single or simple technological fix, and solutions require the participation of the entire watershed community. With appropriate governance and management, success can be achieved.