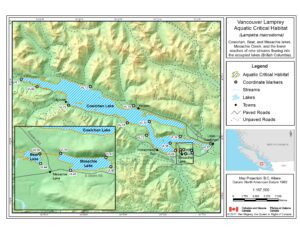 Cowichan Lake lamprey are a species of fish found only in Mesachie, Bear and Cowichan Lakes, and nowhere else in the world. This parasitic fish species is one of only about 38 lamprey species worldwide.

Cowichan Lake lamprey was designated “special concern” in 1986 and after reassessment was designated “threatened” under Canada’s Species at Risk Act (SARA) in 2003.  The animal itself has protections under the act and as of February 2020, the habitat critical for their survival also became protected.  Critical habitat for this species includes Cowichan, Mesachie and Bear lakes themselves, as well as portions of key rivers and tributaries flowing into these lakes. Riparian areas varying from 15 to 30m width are also included as critical habitat.

This means it is now prohibited under the Act to kill, harm or harass the fish itself and it is prohibited to destroy or damage nests and critical habitat. If anyone conducts these prohibited activities, charges can be laid under SARA. So if you are planning on changing riparian areas around the lake or disturbing sediment which may be a lamprey nest you may need a permit under the Fisheries Act as well as SARA first.

To learn more about the critical habitat and specific locations see: https://species-registry.canada.ca/index-en.html#/documents/3326.

Call DFO’s Observe Record Report line (1-800-465-4336) when you see potential infringements to the species and its habitat.