You are here: Home / Resources / How to heal a river 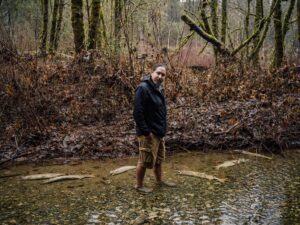 The rain is pounding relentlessly, stirring up silt in muddy side channels of the Koksilah River on eastern Vancouver Island, where a few picked-over chum salmon carcasses attract the attention of eagles. In the adjacent, fast-flowing main channel, mergansers gracefully ride the rough water while an ambitious seal has made its way kilometres up-river to snack on what remains of the season’s salmon run.

Surrounded by scenic forests, acreages and farms, the Koksilah originates on the slopes of Waterloo Mountain, southwest of Shawnigan Lake, and flows through the Cowichan Valley eastward for 44 kilometres before emptying into the Strait of Georgia. The river races through rocky canyons, waterfalls and rapids, descending a total of 550 metres before reaching the shared Cowichan/Koksilah estuary where the flow slows and widens among fans of sand and gravel.