A reprieve for the Cowichan River offers a rare good news story.

PERHAPS IT’S A GOOD MOMENT to let our attention drift from the pandemic-propelled collapse of the Trumpian snake-oil-sales dystopia to the south and the daily litany of coronavirus woes across Canada to some good news that promises to yield benefits long after our current griefs have receded into gloomy tales for grandchildren.

After decades of dithering, hand-wringing, seemingly interminable committee meetings, political buck-passing, corporate two-steps and protests from curmudgeonly self-interest groups, it looks like we are finally going to get serious action to rehabilitate the beleaguered Cowichan River, including raising the weir on Cowichan Lake. 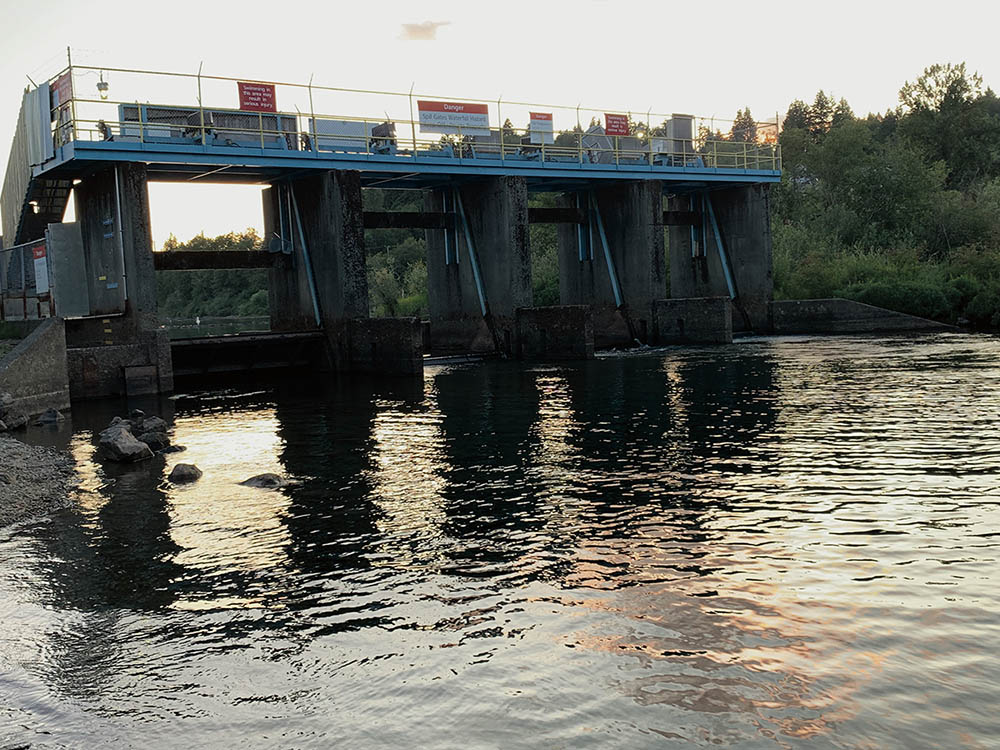 The weir on Cowichan Lake

It’s one of Canada’s iconic heritage waterways, still achingly beautiful and a lynchpin ecosystem for the larger Georgia Basin. Yet it’s been ravaged by residential developers, entitled waterfront landholders, and by industry. It’s been used as a sewer; as a kind of giant waterslide for thousands of recreational tubers; as a source of massive water extraction for municipalities and factories. It’s been channelized, the foreshores intensively modified, the steep slopes above it stripped of forest cover, and the river itself choked with migrating gravel and sediments released by increased erosion.

This is a problem that’s long needed addressing and it’s something we’ve known we could effectively mitigate for a long time now but simply haven’t.

The federal government now says it’s going to put $24.2 million into a new 7-year program led by the Cowichan Tribes that’s intended to remediate the watershed of BC’s blue ribbon heritage river and to salvage it from brutal seasonal yo-yoing between desperate summer droughts and rainy season floods in the lower reaches that are the consequences of rapid climate change.

But just to put the initiative into perspective, welcome as the federal funding may be, the contribution amounts to but one-quarter of the $96-million budget allocated to improve a single intersection at McKenzie Avenue and the Trans-Canada Highway. Those improvements are intended to reduce commuting time from Colwood by eight minutes—a cost of about $12 million a minute.

Think about the relative priorities. The amount allocated to salvage a heritage river that’s the ancestral homeland of an indigenous culture which has been there 10,000 years is what we spend shaving two minutes off commute time to Downtown from the suburbs.

Look, we should all be pleased that authorities have finally decided the Cowichan River is worth rehabilitating. The Cowichan Tribes, who deserve genuine congratulation for having worked so tirelessly toward this objective for so long, are putting up $5.3 million of their own funds to help repair what others have wrecked and are generously co-managing with partners on the Cowichan Watershed Board, another group that’s worked arduously for remediation.

If this is what reconciliation looks like, we should enthusiastically welcome it. And yet perhaps public gratitude toward government is not the entirely appropriate response for something that should have been pursued far more aggressively from on high a long, long time ago.

We’ve watched the painful and undeniable impacts of climate change unfold on the river for decades, amplifying problems created by heedless development, starting with deluded and short-lived attempts a century ago to use the river to float log booms to tidewater.

Chinook salmon runs that numbered in the tens of thousands collapsed. Legendary steelhead diminished. Coho fell by the wayside. Most recently, egg-laden fish have had to be trucked from the lower river to their ancient spawning beds as the river suffered through repeated severe summer droughts—8 over the last 17 summers—while volunteers with buckets struggled to rescue by hand millions of fry stranded in drying pools.

Snow retention on surrounding mountains now averages just 15 percent of what it was half a century ago and this means substantial declines in summer flows into Cowichan Lake where the river rises.

This is a dramatic contrast from winter when heavy rainfall raises lake levels, surplus water spills into the river and frequently results in severe flooding downstream, particularly where homes of Cowichan Tribes members are located in low-lying areas. Just last February, 175 homes were affected by high water with some residents evacuated in dangerously swift water.

And these conditions are going to get worse. Maximum daily summer temperatures are forecast to increase from 1.5 to 2.5 degrees over the coming decades. While a single degree of warming may not look like much, it’s actually a lot in climate time. One degree of warming will mean significant increases in the frequency of both severe drought and extreme rainfall events, warns the US National Aeronautics and Space Administration.

Sixty-three years ago a weir was installed at the outlet to the 45 kilometre main stem of the river. The intention was to hold back flows into Cowichan Lake and to store the abundant winter water so that releases in summer months could maintain adequate flows of cold water for fish.

In fairness, this wasn’t ecological altruism. The weir was constructed so that a pulp mill at Crofton could safely extract sufficient water to keep operating during summer months without draining the river dry.

Dr Goetz Schuerholz, a distinguished wildlife ecologist and chair of the Cowichan River Estuary Restoration and Conservation Association, estimated in an open letter to the local newspaper five years ago that more than 370 million litres a day were being extracted from the river for just industrial use at the mill and municipal water requirements at Duncan and North Cowichan.

On top of that, while the city of Duncan returned waste water to the river as sewage effluent, Schuerholz, whose career with the United Nations involved wildlife conservation in Africa, Asia and South America, noted that about 128 million litres of extracted water per day was never returned to the river but was discharged directly into the ocean as industrial effluent.

None of this water use anticipated the effects of global warming-induced droughts. Over the last decade, inflows to Cowichan Lake have declined in volume by about one-third. And a succession of long, hot summers that signal a new normal will mean even more loss to evaporation.

Last year, lake levels fell so low that storage behind the weir hit zero, meaning there wasn’t sufficient water to normally spill into the river. That spelled disaster for already struggling fish stocks. It also threatened community drinking water, sewer systems and the mill. Sometimes flows have been too low to adequately dilute sewage effluent, resulting in public health emergencies that adversely affected recreational use of the river below the outfalls.

Despite the late hour, if the planned mitigation project comes to fruition, it will indeed be a big deal.

“This is great news,” said Tom Rutherford, executive director of the Cowichan Watershed Board, in the organization’s official statement. “Today, I feel more hopeful than I have in decades for the future of wild salmon in the Cowichan watershed, and for all the communities whose well-being is dependent on that.”

He, too, acknowledged the Cowichan Tribes constancy in the push for rehabilitation.

The caveat, of course, is that the proof is always in the pudding when it comes to government funding promises. Governments change and priorities have a way of evaporating for ideological reasons. Parks once considered inviolate are suddenly on the table for logging, or mining, or tourist resorts, or road improvements. Lands designated exclusively for forestry are suddenly deemed more valuable as residential real estate. Industrial companies that assured environmental cleanup are often nowhere to be found after the profits have been extracted, leaving taxpayers holding the bag.

But this plan, if it comes off, does represent the right decision for all the right reasons.

The wounded Cowichan River still sustains important runs of steelhead, chinook, coho and chum salmon and all the other species that depend upon them, from birds to bears to endangered orcas. There are resident populations of trophy-sized brown, rainbow and cutthroat trout. All are keystones to a world-famous recreational sports fishery and are crucial traditional and cultural resources of the Cowichan Tribes.

Fresh water angling on Vancouver Island, of which the Cowichan River has historically been one of the most important branding elements (daily creel counts were once posted in the New York Times and in the exclusive gentlemen’s clubs of London) generates more than $100 million a year in spending, wages and GDP.

And salt water angling perhaps that much again, although sport fishing for coho and chinook in Cowichan Bay today is but a tattered remnant of what it was 50 years ago. Old timers used to tell me nostalgically of the days when runs were so abundant that you could hear them moving down the coast, and when they were holding in the bay for rain to bring the river levels up, you couldn’t look to a point on the compass without seeing a jumping salmon in the air.

The pulp mill is still a critical employer in the Cowichan Valley, providing about 600 jobs locally.

In the 1990s, advocates for the river began calling for the old weir to be raised to capture more of the winter inflows to Cowichan Lake. The plan was to stabilize river flows, establishing an equilibrium that would provide adequate summer flows for fish, maintain constant feedstock for the pulp mill, secure drinking water supplies for Duncan and ensure sufficient dilution for any effluent.

After waiting for so long, it’s satisfying to see genuine progress at last. It’s been estimated that $10 million would cover the cost of raising and renovating or building a new weir.  Replacing the old structure with a new one that can help stabilize summer flows is eminent good sense, it serves people as well as fish and other species.

So is the seemingly more mundane commitment to remediate the effects of gravel flows and to restore riparian zones and reduce erosion. The $25-million bundle represents a holistic approach to restoring this fabled river and its watershed.

And if anyone deserves thanks for that, it’s less the federal politicians than it is the Cowichan Tribes and the community’s many environmentally concerned volunteers and dedicated activists.

Stephen Hume has spent half a century as a journalist writing about Western Canada, the Far North, BC and the Island.