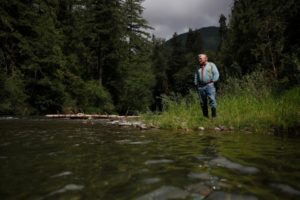 Joe Saysell, a retired faller and fishing guide, has lived on the Cowichan River for more than six decades. He says pumping water from the adjoining lake is unavoidable if they want to prevent the river from running dry.
Photograph By CHAD HIPOLITO, PNG

The Cowichan River, with its resident fish and float-tube-loving humans, would be dead without the heroic intervention now underway, says a regional politician.

On Thursday, massive pumps operated by Catalyst Crofton pulp and paper mill were turned on to pump water from Cowichan Lake directly into the adjoining Cowichan River. The move was approved by the provincial Ministry of Forests, Lands, Natural Resource Operations and Rural Development.

Morrison said it’s a desperate and unprecedented move to keep water flowing into the Cowichan River, now under threat of going dry after years of low precipitation.

“What a sad state of affairs to think a Canadian heritage river could go dry and affect all the ecosystems, the flora and the fauna that it supports,” he said.

Joe Saysell, a retired faller and fishing guide, has lived on the river for more than six decades. Saysell said pumping water from the lake is unavoidable if they want to prevent the river from running dry.

“Nobody wants to do it,” he said. “This is the first time ever, but this is a necessity.”

The Cowichan River supports important B.C. fish species such as steelhead trout and chinook salmon, along with recreational activities such as tubing, canoeing and kayaking.

The mill at Crofton draws its water down-river, near where the river enters the sea.

But since 1998, the Cowichan Valley has undergone 11 droughts, with this year the worst so far.

River ecologists say snowfall in the surrounding high-altitude areas is also down, which has reduced the slow release of meltwater over spring and early summer into the watershed, resulting in low water levels in Cowichan Lake.

“Even for long-term locals, the lake looks real low, low like they have never seen it before,” Morrison said.

Water flow from the lake into the river is controlled by a weir built in 1956 and now operated by Catalyst. But water levels are now below the top levels of the weir and its control gates, so water must be pumped over the weir directly into the river.

Morrison said it’s expected pumping the water could draw Cowichan Lake down as much as 58 centimetres.

Officials are now marking with buoys underwater hazards that might endanger water craft when levels drop, while wildlife officials are keeping on eye on a lamprey population unique to the lake to ensure its long-term survival.

Saysell said it’s difficult to know whether the drop in water levels will affect the lamprey, considered a threatened species, because this has never been done before. “We just don’t know. We’ll have to wait and see and just keep an eye on it steadily,” he said.

Morrison, who shares the chairmanship of the Cowichan Watershed Board with Chief William Seymour of the Cowichan Tribes, said the best long-term solution might be to raise the height of the weir.

That would increase the volume of water that could be stored in the lake. Extra water would mean the river could be kept flowing longer, until winter rains resume.

Morrison said raising the height of the weir is a three-stage process. The first stage, consultation with local users, property owners and others with an interest, has been completed.

The second stage is underway — engineering and design work, and a detailed mapping of the water boundaries of the lake. It’s expected to be completed in about three years.

That work will be supported by the federal and provincial governments, one of four Vancouver Island projects conducted under the B.C. Salmon Restoration and Innovation Fund. A $2.2-million investment in the fund was announced last week.

Morrison said once Phase 2 mapping and design work is done, costs can be determined.

Saysell points to climate change and “irresponsible” logging of second-growth trees on private forestry lands as the cause for the record low water levels in the river. He would like to see stricter governmental regulations put in place to prevent the logging of trees at a young age.

“They’re logging it at least 100 years too soon,” he said. “It’s the trees that hold the water on the hillsides.”

When trees are being cut down at just 40 years old, there aren’t any large trees that can hold enough water to keep the Cowichan watershed healthy, Saysell said.

On Aug. 19, the B.C. Ministry of Forests and Lands moved to restrict the use of water drawn from the Koksilah by farmers and other users. The restrictions could be in place to Sept. 30.

It was the first move of its kind on Vancouver Island under the 2016 Water Sustainability Act.

The province has forbidden farmers to irrigate feed crops such as hay and corn. Livestock and perennial vegetables, however, can be watered.

Morrison said it’s time for people in the Koksilah area to develop a watershed management plan that would include the use of groundwater and surface water.