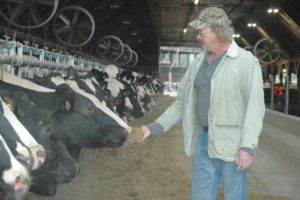 John Vanden Dungen is worried about the future of his farm.

Vanden Dungen is the owner of the 380-acre Meadow Green Farms on Koksilah Road, a dairy farm with more than 300 cows that his father began decades ago.

It’s one of seven dairy farms in that area, and one of the approximately 30 dairy farms that continue operations on the Vancouver Island.

Vanden Dungen hopes to hand the farm over to his two sons and nephew when he eventually retires, but concerns around the availability of water have put those plans in jeopardy.

In August, the province restricted water use by select users on the Koksilah River for several weeks for the first time to protect fish populations, which were considered under threat due to the extremely low water flows in the river at the time.

That meant that specified licences that authorize water use directly from the Koksilah River and its tributaries, and users of wells in aquifers that are hydraulically connected to the river, had to cease all diversion and use of water for industrial purposes and for irrigation of forage crops, such as hay and corn.

Vanden Dungen’s farm has had a water licence to irrigate his corn and grass crops, which are used to feed the dairy herd, with water from the river since 1953, and he had to stop watering his forage fields for many weeks for the first time during what is typically the driest time of the year.

Vanden Dungen said that, fortunately, much of his forage crops had already been harvested by the time the restrictions were put in place in late August, but there was still a risk of losing the last part of the harvest.

“Luckily, we got some rain and we were able to harvest the rest of the crops, but if the river had begun drying up earlier in the season, we would have been in trouble,” he said.

“We have to grow our own forage crops to remain viable because it would be very cost prohibitive for us to have to bring the food in when you consider ferry and other costs.”

Vanden Dungen said there’s no doubt that climate change is playing a part in the area’s water woes, as evidenced by smaller snow packs in recent years on surrounding mountains, but he believes that a lot of the problem is man made.

“People say we are experiencing more droughts, but I have been farming all of my life and have come to the conclusion that weather is weather and every year is different,” he said.

“The biggest issue I can see is that the province began handing out water licences along the Koksilah River like Halloween candy decades ago with no real oversight as to how much water was being used. It’s a problem that’s only getting worse.”

Vanden Dungen said development plans continue in the area and he’s concerned that officials are considering them with no forward thinking as to where the water is to come from to support them.

He said officials from the Ministry of Forests, Lands, Natural Resource Operations and Rural Development have scheduled a meeting on Nov. 20 with the local residents and farmers to discuss introducing some sort of comprehensive water management plan for the area.

“We were told over the last two years that if they had to turn off some of the water, those with older licences like ours would be among the last on the list, but then they said it was a fish emergency and shut us down anyway.”

Vanden Dungen said one option would be for him to build his own water reservoir, but the water would still be under the control of the province.

He said that with the growth in the area continuing, consideration should be made to developing new water reservoirs high up in the watershed system.

“The area gets three feet of rain a year so there’s no shortage of water there. I’m getting pretty worried. I’m not sure where we’ll end up if they continue to shut off our water.”