You are here: Home / content / Cowichan Watershed Board Cheers $24 Million Grant to Cowichan Tribes to address Severe Drought and Flooding in the Watershed due to Climate Change. 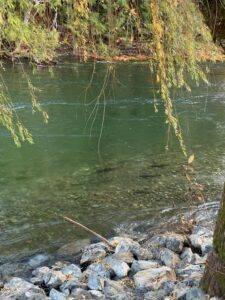 The Cowichan River, located on eastern Vancouver Island, has seen worsening climate change impacts over the past decade, particularly severe summer droughts and winter flooding. Insufficient summer and fall river flows are threatening the watershed’s once famous wild salmon runs, and winter storms have caused terrible flooding in homes located near the river, particularly those of Cowichan Tribes’ community members. The Resiliency Program will run over the next seven years, led by Cowichan Tribes in collaboration with other local partners, to work towards the holistic restoration and stabilization of the Cowichan River, a Canadian Heritage River.

While the funding will need to be supplemented to complete the full resiliency program envisioned, Cowichan Tribes Chief William Seymour, co-Chair of the Watershed Board, described the grant as ‘huge” for the community and the watershed. He thanked the many volunteers who have helped Cowichan Tribes with struggles with flooding, drought, and other issues over the years and said, “Cowichan Tribes is proud of the work the entire coalition has achieved in almost 20 years of fighting to protect the Cowichan watershed. This decision marks a terrific opportunity to permanently benefit one of B.C.’s key heritage rivers and the vibrant community that exists because of it. It’s huge to us.”

Aaron Stone, Cowichan Watershed Board co-Chair and Cowichan Valley Regional District Chair said “The Quw’utsun watershed is the heart of the ancestral territory of the Cowichan peoples who have been the stewards of this ecosystem since time immemorial. The Cowichan Watershed Board and the CVRD applaud this funding to support the ongoing leadership by Cowichan Tribes for the watershed’s health and resilience in the face of climate change, and all the communities that depend on that for our well-being.”

Specifically, the funding will support work to replace the fifty year old weir at Cowichan Lake, currently owned and operated by Catalyst (Paper Excellence) to deliver water to the Crofton mill. The new modern structure will be designed to store enough of the lake’s naturally high winter water levels to keep the river flowing adequately throughout the dry season, and sustain the iconic Cowichan River salmon runs. The new structure will also be able to supply cooler water to the river in order to avoid potentially lethal high temperature levels for salmon and trout during hot dry summers.

This project has been pending for decades, with a broad-based consensus reached in 2018 to replace the weir with a higher version. Engineering and design work is currently underway under the leadership of the CVRD, in partnership with Cowichan Tribes, Catalyst Paper and the Cowichan Watershed Board, funded by the BC Salmon Restoration and Innovation Fund.

The grant will also enable Cowichan Tribes and their local government partners to address significant flooding and land erosion in the Cowichan and Koksilah watersheds. Many Cowichan Tribes homes are impacted repeatedly by flooding causing health and safety issues. In February 2020, 175 homes were affected, with some residents evacuated in fast moving water. Capital infrastructure works, gravel removal, riparian restoration and other measures will be implemented to protect these communities and the river ecosystem from increasing winter floods.

Cowichan Tribes and contributing partners are investing $5.3 million into the watershed project, in addition to the federal government’s funding.

Cowichan Watershed Board Executive Director Tom Rutherford said “Today, I feel more hopeful than I have in decades for the future of wild salmon in the Cowichan watershed, and for all the communities whose well-being is dependent on that. Huy tseep q’u to all the people who have worked so hard to keep moving towards a positive future, and especially to Cowichan Tribes for anchoring this work in the millennia of stewardship experience that only they can provide. This is great news.”