You are here: Home / Water Use Target

We want Cowichan watershed residents to use water wisely.

The changing climate in the Cowichan region was the driving force behind a call to use water more wisely. Water shortages during summer and fall threaten salmon survival, local food growing, water quality, river-based recreation, local businesses, and in some cases, even residential water supply.

Although residential water use is a small percentage of local water consumption compared to industrial and agricultural uses, the CWB chose a residential target based on the “trickle up” theory: if we teach residents to notice and correct small leaks at home, they will bring that culture of conservation to the region’s workplaces. 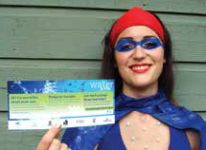 Studies show that Canadians use far more water than residents in most other countries with similar living standards, proving we could live well on less water.  Also, much of the water “use” in Canada is water waste from leaky pipes and taps, and that the amount of water waste can be correlated to water pricing. When prices go up, waste goes down!

Wasted water has many costs, from higher infrastructure and energy costs for water providers (and ratepayers), to dry wells and critically low river flows in some areas. With the increasing trend towards summer drought, coupled with an ever-growing population, it’s time for a culture of conservation.

This target was inspired by success in the Town of Ladysmith, where residents reduced their total water use by about 25% between 2002-2013, while the population grew by 20%.  Ladysmith’s average residential water use at that time was 263 litres/person/day, so the challenge was to “meet or beat” Ladysmith!

In July 2014, the CWB launched the Cowichan Water Conservation Challenge with superhero Water Woman bursting onstage with regional leaders in downtown Duncan during the community’s annual summer festival.  The Challenge is a five-year initiative to track and reduce residential water use.

CWB member David Slade, a local well-driller and groundwater expert, made presentations to all local governments and major water suppliers that spring, asking them to join the challenge.  The seven largest water providers all signed on to the challenge and have been meeting annually, collaborating on water conservation bylaws during drought, and reporting their progress.  The partners are Municipality of North Cowichan, City of Duncan, Cowichan Valley Regional District, Town of Lake Cowichan, Town of Ladysmith, Cowichan Bay Water District and Mill Bay Water District. Each partner has been working to reduce water consumption through actions like education, tiered water rates, monitoring for leaks, and improvements in outdoor watering bylaws. The CVRD ran a major public awareness campaign making the link between water use and the new normal in climatic conditions. 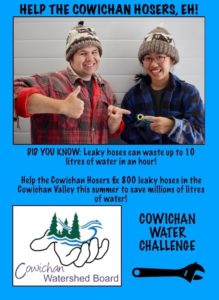 In addition, the CWB’s superhero program has been sending a variety of masked comic-book-style crusaders such as Water Woman, Flo, Raindrop and Leaky Hoser to public events, children camps, and participating storefronts since 2014. Rallying cries like “it’s hip to fix a drip” focus on valuing every drop, and the superhero approach framed the effort as an urgent but feel-good way for people to act in a seemingly daunting situation.  In 2017, comedic spokespeople, the Cowichan Hosers, appeared in lumberjack shirts, Cowichan knit toques to encourage people to fix leaky garden hoses. Calculations show that for every 100 leaky hoses fixed, approximately 1 million litres of water will be saved seasonally.  By fixing a dripping hose once, residents will likely notice and fix drips in the future, so the benefits will “trickle up.”

In 2017, the group added a “Capture the Rain” campaign, bringing the macro-story home through classroom presentations and workshops to Slow your Flow (drip irrigation) and Grow your Flow (rainwater harvesting). While the Fish and Flows working group focused on watershed-scale rain storage through raising the height of the weir at Cowichan Lake, the Water Conservation group urged residents to do the same thing at home. Media articles and editorials profiled local people who are taking the lead, demonstrating a wide variety of ways that people are capturing spring rain to mitigate increasingly dry summer conditions. More info:  www.cowichanwaterchallenge.ca

Annual residential water use statistics are collected from the seven participating Cowichan Water Challenge water purveyors every spring. Highlights of the 2017 consumption results (compared to 2013 values):

(2017 statistics were not available from Cowichan Valley Regional District, City of Duncan or Town of Lake Cowichan) 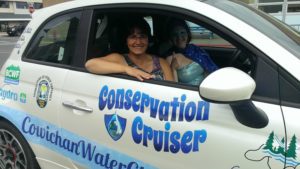 Water Challenge Final Reprt - Its Hip to Fix a Drip