You are here: Home / Cowichan Watershed Board – Targets 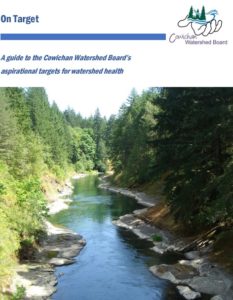 The Cowichan Basin Water Management Plan (2007) included an ambitious and daunting to-do list comprising a vision, six goals, 23 objectives, and 89 actions. However, when local people sat down together with the plan as the newly formed Cowichan Watershed Board, they decided that a more motivating and inclusive vision was needed to guide implementation. The list had to be refined to form a set of more manageable targets that the community, including Cowichan Tribes, could support.

Draft targets were considered for months by the Technical Advisory Committee, carefully running each through a set of criteria to arrive at the Target set that is still guiding CWB today. The targets were intended as aspirational initiatives, distilled into powerful statements that became rallying cries. Efforts were made to make each target tangible, measurable and achievable, either directly or by adding measurable progress indicators.

A brief background on each target with updates as of 2018 are at the links below.

Once the targets were set, the CWB sought out knowledgeable representatives from local stewardship groups, government agencies, industry and the Cowichan Tribes First Nation to guide and implement the targets. Working groups coalesced around each target.

These committees represent most of the major partners working in this area, including a mix of staff and volunteer members. They share the whole-of-watershed thinking, crossing jurisdictional lines to support the good of the watershed and community. Initially, there was a working group for each target. However, for added efficiency, some working groups merged to cover two to three interrelated targets.