Doug Donaldson, Minister of Forests, Lands, Natural Resource Operations and Rural Development, met with Chief William Seymour of Cowichan Tribes in Duncan on Feb. 7, 2020, to sign an interim letter of agreement for the project.

“This agreement is an excellent example of how governments can work together to benefit residents and help protect valuable natural resources,” Donaldson said. “Effective stewardship of the Koksilah Watershed is a goal that we all share.”

During recent dry summers, water flows in the Koksilah River have been low enough at times that the survival of resident and migrating salmonid species could be threatened. To ensure water sustainability, ministry staff, in partnership with Cowichan Tribes, are looking at the feasibility of using new tools in the Water Sustainability Act to better manage the Koksilah Watershed.

“Cowichan Tribes appreciates that action is being taken by the Province to look after the Koksilah Watershed in partnership with us. Help for the Koksilah River is long overdue,” said Chief William Seymour of Cowichan Tribes. “Climate change is causing repeated droughts year after year and massive flooding like we saw this week. We can’t wait any longer. We need to work together, government to government and with all the affected people in the community, to deal with this and plan for a better future. A water sustainability plan sounds like a possible way forward, and we’re pleased to have the opportunity to pursue that together with the Province in our territory.”

The Ministry of Forests, Lands, Natural Resource Operations and Rural Development has the jurisdiction to implement the provincial Water Sustainability Act. However, the newly signed interim letter of agreement commits the ministry and Cowichan Tribes to collaborate and jointly oversee and participate in a long-term planning process for the management of the Koksilah Watershed.

“I was truly heartened to witness the signing of this agreement between Chief Seymour and Minister Donaldson today,” said Sonia Furstenau, MLA for Cowichan Valley. “This type of government-to-government agreement is an example of reconciliation in action and something we need to see more of. It is an important step towards the long-term protection of the Koksilah Watershed.”

This agreement also reflects the B.C. government’s commitment to the United Nations Declaration on the Rights of Indigenous Peoples.

In August 2019, a ministerial order under the Water Sustainability Act was issued to specific water users (including surface and groundwater licensees, and unlicensed groundwater users) to stop using water, in an effort to help protect fish populations in the Koksilah Watershed. It was the first time that such an order was issued in the West Coast region.

Images by Cowichan Watershed Board (photos by Barry Hetschko) 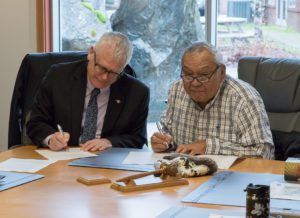 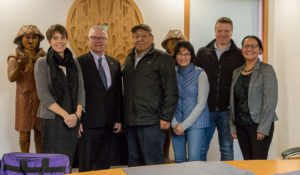 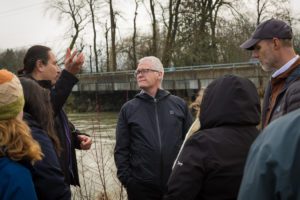