Water sustainability plan may be required. 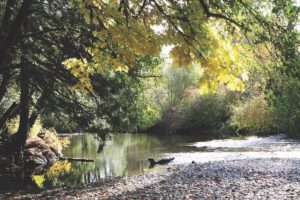 A water sustainability plan may be required for the users of the Koksilah watershed if drought continues. (File photo)

While many in the Valley are focused on low water levels in Cowichan Lake and Cowichan River, the situation for residents who depend on water from the Koksilah watershed could be even worse.

Residents with wells and water licences in that watershed area have been requested by the province to reduce their water use for the remainder of the dry conditions being experienced in the region.

A letter from David Robinson, the province’s assistant water manager for the west coast region, dated June 5, said if the water levels in the watershed reach critically low levels, as forecasts are indicating, regulatory action may be triggered which may include restricting water use under the province’s Water Sustainability Act.

“While water remains available for use, we are concerned that the current situation will lead to critical low flows this summer, affecting fish habitat,” Robinson said.

She said that while in previous drought years, letters were sent to those with water licences to conserve water, this is the first year a letter was sent to almost all water users on the watershed.

“It’s a real worry and there’s huge community interest on this issue,” she said.

“We need to think seriously about our land-use practices. We have a huge farming community, private forest management lands and also a lot of residents dependent on the watershed. There are so many demands and only so much water to go around, so we have to ensure it goes to the highest priorities.”

Tom Rutherford, executive director of the Cowichan Watershed Board, said water levels in the Koksilah River go much lower than the levels in the Cowichan River, one of the main groundwater sources for the Valley, during times of drought.

“Cowichan River has a large lake at the head of it while the Koksilah River does not, so hydrology issues there have to be dealt with in different ways,” he said.

“Currently, the situation in the Koksilah watershed is even more dire than the one in Cowichan.”

In the letter to the Koksilah water users, Robinson said that evaluating the efficiency of their water systems with respect to leaks, design and unnecessary irrigation will help ensure maximum benefit and minimal waste of their water use.

He said a monitoring and forecasting program is being led by provincial water staff with the goal of providing advanced warning of when river flows are approaching what is called the “critical environmental flow threshold”, and if the flows in the Koksilah River fall below the CEFT, action may have to be taken.

Rutherford said the Koksilah watershed is the first on the Island where provincial water staff, include biologists, have been actively monitoring flows on a regular basis for years to determine impacts on fish habitats.

He said a new tool that has been developed is water sustainability plans for watersheds that are vulnerable to drought conditions which would involve all residents, businesses and operations that depend on water from the watersheds.

“Everyone would get together to figure out how to manage the land better to sustain better water flows,” Rutherford said.

“Aspects of the plan would be enforceable if all parties agree. If such a management tool is developed for the Koksilah watershed, it would be the first one in B.C.”

The B.C. government already announced a Level 3 drought rating for all of Vancouver Island and the Gulf Islands last week.

The heightened alert means a call for voluntary water-use reductions for all surface and groundwater users, including farmers, local governments and residents alike.